After having my son, I was quickly sent home from the hospital. I was tired, had no idea what I was doing, and (honestly) in a fair amount of pain. My nights and days started to blur together, and I couldn’t keep anything straight. I didn’t know when I had last fed my baby, diapered, etc. because in those wee hours of the night, 12AM feels like 2AM feels like 4AM. I would wake up at times and think it had been 5 minutes, and couldn’t remember if he ate an hour ago or two or if he literally had just eaten and was wanting something else. I had started writing things down in a journal, but once I went back to work I needed a better and easier method for my caretaker (my mom,) and my husband to know who did what last and what our guy currently needed.

I searched the app store, and found several different free versions. None did what I wanted fully, until I found BabyConnect.

I’ve been using this app for 6 months or more now, and I use it all day every single day. It’s so comprehensive, and while it costs $4.99 in the app store, it’s worth every penny. We bought it three times over, before finding out that you can make the purchase once and have it on multiple devices. Even then, it is worth the $15 we ended up spending.

BabyConnect allows you to quickly and easily track nursing, bottles, diapers, medications, milestones, vaccinations, and SO much more. And, there are graphing features that will tell you the intervals in which your child is eating, how many ounces a day/week, as well as how many diapers you’re going through any given day. I have mine on the “recent entries” view, so I can 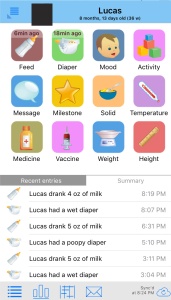 look at how his day has progressed to see if he currently has any feeding/diapering needs (which comes in particularly handy when I pick him up from my mom’s house not knowing when he last ate.)

As much as I hate to say that I track nearly everything, I really do. If you have several people caring for your child, as I do, it’s important for everyone to be on the same page without too much effort.

I look back at my paper journal now and laugh, because I would write down stats in the wee hours of the morning, and my writing would be so terrible that I couldn’t even read it when I needed to know what it said. Thankfully, with the app you just have a few button clicks to record what’s going on.

What’s even better? You can change your home screen to only display the features you’re using. Nothing is more frustrating than having to sort through icons when you’re exhausted. 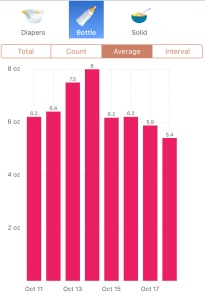 The app syncs automatically as soon as someone adds an updated event. I’ve never had any issues with the sync feature, but if you do it’s easy to force it to sync by hitting the refresh button on the lower right side of the screen.

-App will tell you what percentile your little one is in when you record their height or weight.

-Complete customization. If you don’t like the wording in some portion of the app, you can change it to your own.

-I love being able to leave little notes in there for the next person to look at (my mom, who would leave notes like “Gram loves Lucas”)

-If you record something incorrectly, you can change it at any point.

-Vaccination schedule: I’ve added in most vaccines that my LO has received, because they get SO many that it’s easy to lose track.

-If you’re dealing with a medical issue, you can tell the app to generate an email with information to send over to your doctor (our LO had severe reflux for many months, so we tracked his medications and could quickly pull them up for our pediatrician.)

You can read about some of the other features here.

Overall, I give this app a five-star rating. There is nothing as comprehensive (that I’ve found so far.)

So to the developers of this app: thank you for creating something so parent-friendly! It’s such a great resource and I fully intend to continue to use it at least until my guy is a year old.

Hope you get some use out of this great technology, parents & care-takers!

One thought on “BabyConnect App Review”