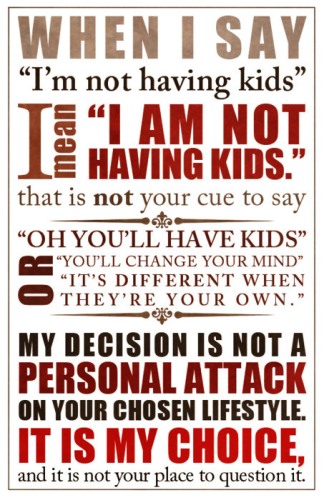 Being a single young woman in my mid-twenties, the focus of my life has been furthering my career, my education and traveling with my dog.  For me, the idea of kids is about as far from my mind as winning an Oscar in the next few months.  However, for the past decade, I’ve been having the same dreadful conversation over and over.  As soon as the words “Do you want kids?” leaves someone’s mouth, I feel myself begin to cringe and roll my eyes.  The conversation with friends, family and strangers alike always carries the same tune.  Really, there’s only one right answer to give if you want to walk away without a healthful dosage of hearing how you have no idea what you’re going to miss.  And believe it or not, these conversations are incredibly hurtful.

Every time I have to tell someone I don’t want kids, it’s like stepping on egg shells.  The decision is so incredibly personal that it is amazing to me that I have to field statements from total strangers like, “You look like the kind of woman who wants to settle down and just have a couple of kids!”  What?  Excuse me?  There are so many things I want to say during this conversation, but it just seems so pointless to try to sort it all out in the moment in order to give someone the big picture.

In fact, this topic is personal enough that I prefer to remain anonymous while writing this blog.  Although, as I try to explain the mentality that accompanies the decision not to have my own baby burrito, I’d like to share that I am writing from two perspectives.  The first, is that I do not want kids of my own.  The second, is that I recently found out that I will almost with certainty, be unable to have my own kids because of a hormonal disorder that has debilitating effects.  The following is everything I wish to say to someone during a conversation about children, but can’t.  I am writing from my own perspective, but have also incorporated ideas from others who are in the same boat.

So without further ado, here is Everything I Wish I Could Tell You when You Ask if I Want Kids

So there you have it, ladies and gentlemen.  I hope this blog post has given some additional insight into the mentality behind someone who does not want a traditional family.  Being mindful of your responses to women who do not want children is not only going to make you appear to be more respectful than your average Joe, but will also help you develop a better founded relationship with those you meet who are glad to share in your family joy with you, but don’t wish it for themselves.  You might be surprised that when you are willing to respect a woman’s response to the question, that she might be willing to tell you a lot more about it.