Giving my son a haircut was a nightmare, until I discovered these…

Okay. I apologize for the clickbait, but this is so 100% worth it.

My son was born with a mop of thick, dark hair. It quickly fell out, but within a week he had hair again! By 8 months old, his hair was in his eyes and he legitimately looked like some kind of hippie infant (which, I’m okay with. I briefly considered dreadlocks.) My husband and I took our son a street over to our local barber. I had called in advance to make sure he was comfortable with cutting a small child’s hair, to which he replied “oh yeah, I cut my nephew’s hair all the time.” Looking back, this should have been my first red flag.

The experience was horrible.

My son cried until he was red in the face. He hated the clippers, hated the hair in his face and really hated staying still. The barber was shaking and my blood pressure was through the roof.

My son needed another haircut (FML is the appropriate response here.) My sister-in-law is a pro stylist and she has the patience of a saint (obviously, she married my brother. HA! Love you baby bro!) but Lucas still didn’t tolerate the haircut. I mean, when those clippers turned on, it was more like an exorcism than a haircut.

So that was it. I was done. I was firmly set on growing his hair into little baby dreads. I’d buy him some cool Bob Marley t-shirt, figure out how to clean dreads (does one shampoo dreads? I don’t know.) It just wasn’t worth cutting his hair.

I finally gave in and started cutting his hair on my own. I placed him in a booster seat in my living room, put on his favorite show and gave him some snacks and a drink. I only used scissors. While he stayed happy, not only did it take me a good 30 minutes, but his hair was far from even.

I did this several time before getting in touch with Calming Clippers. Considering my son has had 7 haircuts and is only 17 months old, I needed a solution and was willing to try just about anything for a peaceful haircut.

Calming Clippers is a system composed of typical salon scissors with an attached plastic comb, similar to what you’d add to the end of clippers. The kit comes with scissors, 7 combs of varying sizes, a cape and an organizer. The clips were incredibly easy to attach and detach, and I had no issues changing the tension in the scissors. They also have gel bands in the finger holes to change the sizing to fit smaller or larger hands.

The scissors are branded for those with “sensory sensitivity“. They are ideal for children, but also those with sensory disabilities, in particular children and adults with Autism (as an aside, having worked as a tutor with children that have Autism, the concept of these scissors is going to be so revolutionary to parents that struggle through haircuts due to sound sensitivity!) While my son doesn’t mind most loud noises, the sound of the clippers simply terrifies him, so eliminating those for hair cuts for the time being is the best solution.

To use the scissors, they recommend first cutting the longer locks and then doing rapid cutting while brushing with the comb. My personal experience with these proved that to be accurate in achieving the best cut. For my son, I did a faded look using the 1.5 comb on the sides and the 2 on the top. I was shocked and so relieved to see how even his hair looked. The entire process took me about 5 minutes. That’s it.

I did find that hair sometimes gets stuck while combing it up, in a way that the hair folds down under the clip, making it so that it doesn’t actually get cut. My solution to this was to wet his hair which assisted with keeping his hair all combed in the right direction. The areas around the ears are still difficult, but with some practice, I have no doubt that I’ll be a pro soon enough. I still take a razor to his sideburns to create a straight line (I just used a 5 blade razor and quickly evened out the area while firmly holding his head to ensure that there was no chance of injury.)

This product has saved my sanity. I cannot possibly thank Calming Clippers enough for the anxiety that they’ve saved me. What a simple, yet amazing solution to such an intense problem for us!

Watch a video on the Calming Clippers HERE

You can purchase these for around $35.00 — essentially the cost of two haircuts. In my book, that’s money saved over the course of 10 haircuts a year!
Calming Clipper Haircutting Kit for Sensory Sensitivity, 10 Piece

Here are two recent photos of my son hanging out with his new haircut! 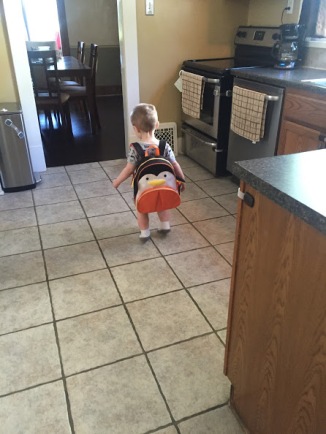 **Burrito Buzz received this product at low or no cost for the purpose of review or testing. No compensation for a positive review was provided. All product reviews are based 100% off of our personal experiences and we never guarantee a positive review.**