Life with little ones.

I’m the mom that’s out in public, sympathizing with the parents of screaming children. While my 19 month old son is exceptionally well-behaved in public, he’s had his moments like every child does. Having only one child, I’m able to be vigilant about damage control. One parent, one child. I can usually calm him down, entertain him, or get through our ventures a little faster to keep him content. If he’s really unhappy and going to go into full on tantrum mode, I promptly leave. But add more children in the equation? I’d certainly not be able to control the situation.

That being said, guess what world? Parents need to go out just like anyone else. We need groceries, stamps, we need to go to doctor’s appointments. Just like anyone else, going out is not optional. And why should we avoid going out? If anyone needs to avoid cabin fever, it’s those trapped talking with babies and toddlers 24/7, watching Minions endlessly, and cleaning up mashed Goldfish crackers from the carpet. We need to know that a world still exists outside of our life of parenting little ones.

Just a few weeks ago, I found myself in an odd situation. I was on my lunch break from my part-time job at one of my favorite local restaurants. The table in front of me consisted of two middle-aged working women, also on their lunch break I’d assume. Behind me, there were two moms and several little ones ranging from infant to 3 or 4 year olds. The children were restless, not sitting down, a toddler was taking her shoes off and joining other tables to see what other patrons were up to. My own parenting style wouldn’t allow my children to bother other paying customers, but I was not irritated, upset, or put-off by the children at the restaurant. The mothers there, were obviously outnumbered. One had a leg cast up to her hip. The two working women at the table in front of me were beyond irritated and made plenty of snarky comments. I suppose they were waiting for a reaction from me, as the one small child kept coming over and hanging out with me.

But they didn’t get a reaction from me.

Instead, I talked to the little girl and let her sit at our table for a few minutes. 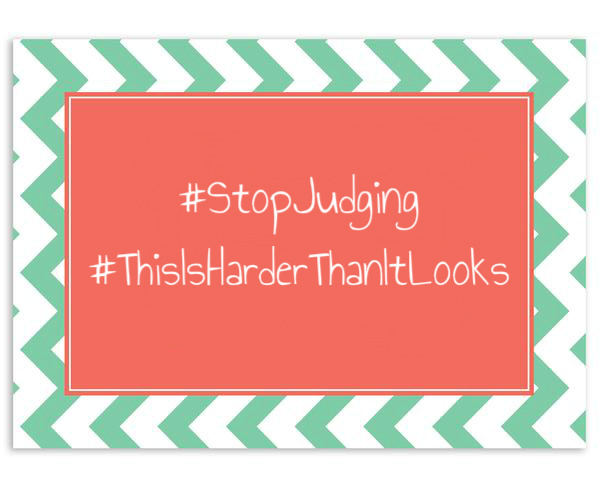 Children do not come programmed with emotions. And parents aren’t perfect. While children should be taught how to act in public, it’s not an overnight process. This was a family-friendly restaurant, not a place where you should expect to dine quietly or without some small annoyance. I often find myself conflicted about going out in public, especially to restaurants, where I fear that my toddler’s unpredictable moods could impact the experience of other customers. More recently, I’ve gotten over the fear of judgement and just done it.

Our littles can’t learn how to act in public if they aren’t allowed in public.

I think that people forget what it’s like to have children or have simply not been around them a lot. The level of annoyance that I see on a daily basis caused by small children is astounding to me. Most parents, myself and my husband included, are doing the best we can to raise a responsible, kind, considerate little person. I’m guessing it will take around 20 years.

So, the next time you’re in public and annoyed by a child that isn’t perfectly well-behaved, do yourself a favor and choose kindness over judgement or harsh reaction.

Sometimes all a parent needs to get through the day is a smile from a stranger when their toddler is refusing to leave aisle 2 in Target.